– Targeting Tumors from the inside – 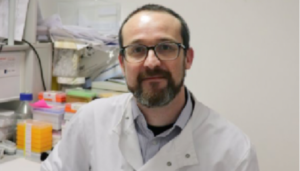 Dr. Bart Cornelissen is Group Leader and Associate Professor at the MRC Oxford Institute for Radiation Oncology of The University of Oxford’s Department of Oncology and has headed the Radiopharmaceuticals and Molecular Imaging group since early 2013.

His research focuses on the development of radiolabeled compounds for molecular imaging of DNA damage repair (1) and the tumor microenvironment, and the radiobiology of radionuclide therapy of cancer.

“Recently, you published a review article on “Imaging DNA damage with PET and SPECT”.  Can you elaborate on the advantages and challenges encountered when targeting intracellular and intranuclear epitopes with radioisotopes for molecular imaging and therapy of cancer?”

Simultaneously imaging SPECT and PET radioisotopes seems to enable quite a number of advantages. You looked at this for interrogating tumor heterogeneity?

“We shouldn’t regard a tumor as a homogenous unit. Rather, the diseased tissue is often highly heterogeneous. In different parts of a tumor there are differing signaling pathways and receptors and various proteins, which are key for signaling in cells. Against this backdrop, it is not easy to use radio isotope imaging techniques such as PET with the frequently used 89Zr immuno-PET using radiolabelled antibodies to visualize the relative concentrations of that antibody’s epitope at specific locations within a tumor. By using MILabs’ VECTor PET/SPECT/CT, we have been able to develop a new dual-isotope technique which allows us to accurately quantify how much uptake of a cancer-targeting antibody is actually caused by non-specific factors such as leaky blood vessels and necrosis. This is important as its sheds light on a phenomenon which is not detected with current preclinical imaging methods and it could help better interpret uptake. We are now taking this further and exploring other useful applications of dual-isotope imaging. The ultra-high-definition PET (<1 mm) combined with ultra-high-resolution SPECT enables to visualize sub-regional differences in tumors and greatly facilitates the study of radionuclide therapy agents. As presented at the 2020 EMIM conference,  high-resolution intranuclear immune-PET/SPECT has potential as a highly specific, sensitive and versatile imaging modality. The multi-isotope technology allows us to study the biological effects of 177Lu-DOTATATE therapy, including DNA-damage response monitoring with 111In-anti-γH2AX-TAT (2). Also, imaging of new alpha-emitting molecular radiotherapies targeting the tumor or its microenvironment are possible. In this respect, it’s remarkable that a single VECTor PET/SPECT/CT platform can handle all these applications at high resolution in mouse models of human oncology.” 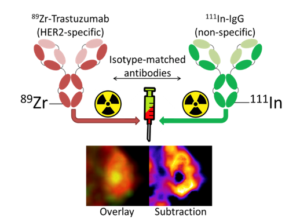 “Can you comment on your recent work for detecting pancreatic cancer earlier so that more patients can benefit from life-extending and potentially curative surgery?”

“Our group at Oxford has looked quite a lot at improving therapy evaluation and earlier detection of pancreatic ductal adenocarcinoma (PDAC), which makes up approximately 90% of all pancreatic cancer cases. Unfortunately, PDAC remains difficult to cure, with a dismal 5-year survival rate of less than 5%. As a result, PDAC is projected to become the second most frequent cause of cancer-related death by 2030. Because current PDAC therapies are only minimally effective, the best chance of a cure is surgical resection. Most patients, however, are ineligible for surgery because they are diagnosed at an advanced stage, when the cancer has already spread beyond the pancreas.

Unfortunately, and despite its widespread use in oncology, the PET radiotracer 18F-FDG is ineffective for improving early detection of PDAC. FDG also cannot be used to determined whether commonly used chemotherapy drugs are working effectively – which they do not in more than 80% of patients treated with these highly toxic drugs. Therefore, we developed an alternative strategy for early detection of pancreatic cancer. This method involves visualization of hyperactivation of DNA damage repair singalling in high-grade pancreatic intraepithelial neoplasias (PanIN-3s), generally regarded as the noninvasive precursors of PDAC. We investigated whether the SPECT imaging agent 111In-anti-γH2AX-TAT allows visualization of the DNA damage repair marker γH2AX in PanIN-3s in an engineered mouse model of PDAC, to facilitate early detection of PDAC, at the same time as using 18F-FDG, in the same mouse. 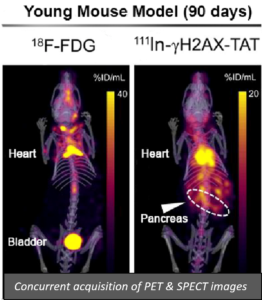 As illustrated in the images we used concomitant imaging with 18F-FDG and 111In-anti-γH2AX-TAT to illustrate that 111In-anti-γH2AX-TAT may be a promising new tool to aid in the early detection and staging of pancreatic cancer, whereas 18F-FDG detection fails under identical conditions. The same technique could be used to visualise effective chemotherapy in mice bearing PDAC tumors (3). The VECTor/CT scanner has allowed us to maximize data from these valuable models of PDAC, whether used for PET or SPECT or both.”

– Spotlight on the Orthopedic Imaging at UMC Utrecht, the Netherlands –  – Prof. …

Under the new ownership of the Rigaku Group (Tokyo, Japan), MILabs is pushing the value …

August 3, 2021 – Houten, the Netherlands Dear readers, We are very excited that MILabs …

– Targeting Tumors from the inside –   Dr. Bart Cornelissen is Group Leader and …

A Pioneering Mind in Nanomedicine and Theranostics Prof. Dr. Dr. Twan Lammers is Head of …

September 4, 2020, Utrecht, The Netherlands Each year, at the occasion of the Annual Congress …

August 27, 2020, Oslo-Norway and Utrecht-The Netherlands Bayer AS has installed a state-of-the-art MILabs VECTor …

May 12, 2020, Southampton, UK – Utrecht, the Netherlands The Faculty of Medicine, University of …